Takoma is a physical, medium framed utility type player with a ton of strength, very intriguing natural ability, high competitive drive but extremely crude baseball tools that need time to develop. Football player and a baseball field type guy (think Bo Jackson type). He's a plus athlete and relies almost exclusively on natural athleticism at this point, and despite his love for the game just has not spent a lot of time in baseball yet. A square, medium type frame that is going to be able to support a lot more strength gains and runs a surprisingly 6.9 in the 60 despite heavier build, and with strong strides has a chance to even trim down from that. Very crude offensively but shows a surprising ability to put the bat on the ball consistently due to VERY GOOD eye hand coordination. Uses a big leg kick to create some weight transfer and does a surprisingly nice job of getting foot down on time. More strength than bat speed and with some stiffness to swing but in BP has some legit raw power once he let's it fly. Shows ability to battle with 2-strikes and it might not look pretty but he can do the job. Extremely inconsistent mechanics but with adequate coaching there's a lot tap into, just needs some continued development to loosen him up and free up his hands. Has strength in the swing and has a chance to do some damage as he learns to get barrel to ball more consistently. Pitch recognition will be critical for a late starting hitter such as Takoma so will need to accumulate at bats. Defensively showcased behind the plate at catcher and in the OF. OF will be the better option with chance to provide some OF versatility. Also showcased on the mound. Very crude delivery but shows athleticism and body control on the mound with some ability to make quick adjustments. Lot of mechanical adjustments will be needed but has a raw foundation to work with. Arm slot varies and hardly uses his lower half at all. FB was 68-72 in August Showcase but with some small adjustments he was 75-77 in October Lansing Showcase (see video below) with occasional heavy arm side run. Have had him up to 80mph in the past but velo remains extremely inconsistent. There's 90mph projection in there, the question is - will it get there.
Shows some feel to spin both a very projectable 12-6 CB (see end of video below) but often on the side for a ¾ CB (58-62) but both with surprising quality to shape and some feel to land for strikes. He flashes a Slider-Slurve at 67mph and a solid change-up at 68mph as well but both are used infrequently.
Takoma is a very raw project who gets by right now based on pure strength and athleticism. Has a surprising feel for the game despite very little time playing and has a chance to make rapid & significant improvements with continued time playing and quality coaching. See Takoma as project type JUCO player both offensively and on the mound, who needs to get time playing and go through some growing pains with a chance to make big jumps on the other side. 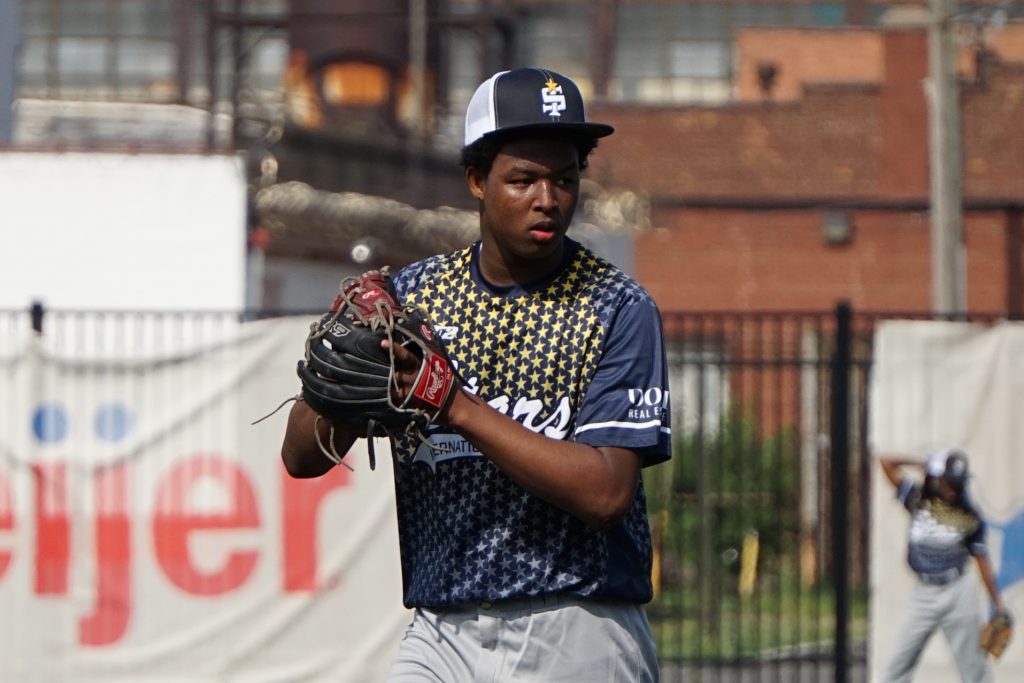